The first time we were invited to a performance at The Garage, I was nervous.  A theatre show with two ‘strong-willed’ girls who can’t sit still for very long?  The idea filled me with dread, but as soon as we arrived I realised All-in Productions and The Garage have got it sussed. 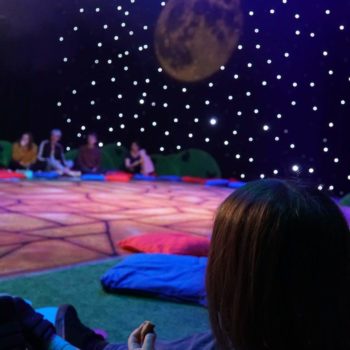 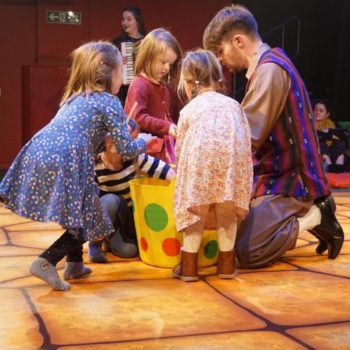 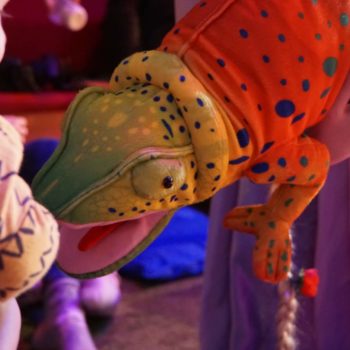 Now, of course, we’ve been to so many of their performances, I can honestly say if you’re having the same worries about taking your little one, don’t.  The show is pacy and the actors are amazing at reacting to what the audience say to them, or what they’re doing.  The children are allowed to be children, in all their interrupting and excitable glory!  Joining in is positively encouraged and it isn’t a problem if you have to leave to pop to the loo or do a nappy change, and I felt confident to breastfeed the Teeniest One during the performance too. 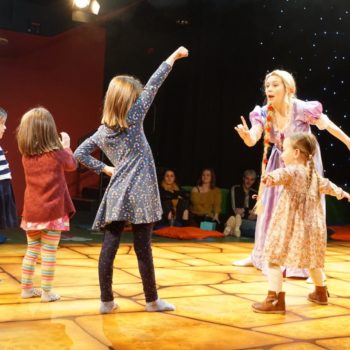 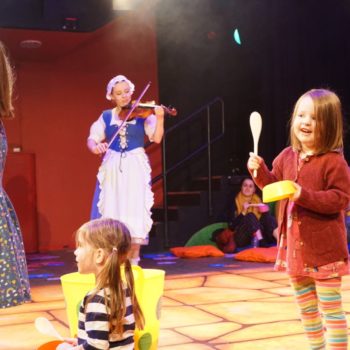 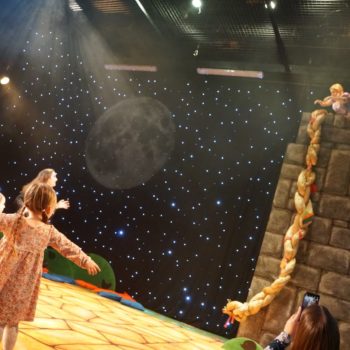 As with their other shows we’ve been to, the actors are centred in the middle of the room for the performance with cushions all around for the audience to sit and a few tiers of seating at the back.  This means that little ones can hop up and down easily when they’re asked to help and join in (and you can see from the expression on Middle Mumbler’s face in one of the pics above bashing the bowl with a spoon…she loves getting to join in!).

The Mini Mumblers are 5, nearly 3 and 5-months-old, and even the Teeniest One’s face lit up when the Prince played his guitar to him, which goes to show even at that young age, he still got something out of it.

The story is simple, uncomplicated and easy for children to follow along, with a nice message at the end that Rapunzel saves the Prince and she doesn’t need rescuing.  The children get to help Rapunzel’s Dad collect vegetables from Dame Gothel’s garden, they get to play with shadow puppets, hop like frogs and dance along to the songs.  It truly is a lovely performance and one we wouldn’t hesitate to recommend you take your Mini Mumblers to!

Tickets are available online HERE and are £12.50 for adults and £7.50 for children.  Under 1’s go FREE.
Shows run to 12th January 2020 and there are designated ‘Relaxed’ performances too.  See their website for details.